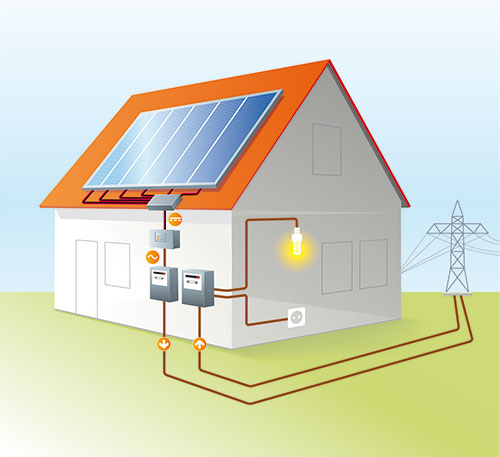 The focus of this article is PG&E’s Net Energy Metering Program, which allows a solar electric (Photovoltaic or PV) system to be connected to the grid, and feed energy back through the meter to directly offset energy usage. This means that sometimes more power is being consumed than produced, and other times more power is being produced than consumed. The production of solar is very predictable, and a direct function of the time of year, and weather to a lesser degree. A PV system at our latitude produces about twice the energy on a summer day as compared to a winter day. Most of the time, a grid tied PV system will produce more energy than consumed during the summer, accruing credit, then as the daylight hours wane into the fall and winter, that credit is consumed. The NEM program is billed annually because of this, otherwise some months the user would owe PG&E, other months PG&E would owe the user. At the end of the billing cycle, PG&E sends a “True-Up Bill” to reconcile.

Time Of Use
Time of Use (TOU) metering means that the cost of a kilowatt hour (kWh) is dependent on the time of day it is produced or consumed. There are many types of TOU plans, but for all of them the cost of energy is highest in the afternoon, and lower at night and early morning. A PV system can export energy onto the grid at this high rate when the sun is shining and be consumed later at a lower rate. Because of this leveraging of cost, a PV system does not have to produce 100% of the energy to offset 100% of the cost of that energy. The Electric Vehicle (EV) rate is currently the most advantageous plan available for those with an electric vehicle as the cost of a kWh at night is 15 cents, and during the afternoon and early evening it is 45 cents. The trick is to minimize usage during this peak time to allow as much energy to be exported as possible. Other TOU plans are available, but there is not as much difference between the highest and lowest rates.

Minimum Bill Charges, Non Bypassable Charges, and Excess Energy Production
Solar can offset the cost of energy, but it is not possible to eliminate all PG&E costs. There is still a minimum bill charge of about 33 cents per day, or $120 a year. PG&E also charges Non-Bypassable Charges (NBC) for each kWh that is imported from the grid. Solar Works can calculate these costs if the interval usage has been supplied.

Producing more energy than one uses during the course of a year is generally not advisable, because the cost for that energy is reimbursed from PG&E at 3 cents per kWh, and at about 7 cents from Sonoma Clean Power, for a potential total of 10 cents per kWh. This is much lower than the retail rate, so a system that produces more energy than consumed has a longer return on investment than if it is sized to meet the needs of actual energy usage.

Supplying Solar Works with hourly energy data
Solar Works needs accurate usage information in order to accurately design a PV system for each client’s needs. Modern electricity meters capture the energy usage for each hour of the year, called interval usage, and this is the data that is most useful to us. It allows us to project the consumption and production per hour of each day, and accurately calculate a system size because we know exactly what the usage habits are. Often we can offset 70-80% of energy usage to offset 100% of the cost of that energy, and occasionally even a lower percentage in optimal conditions.

Before this technology became available, we had to estimate when during the day people used energy. As a rule of thumb, we would seek to offset 85-90% of the usage, and let the leverage of the energy cost do the rest. For those without modern meters, this is still the case.

Future Use Projection
Getting past usage information is vital to designing a PV system, but electricity usage changes. There is a big push to stop using natural gas in homes, so more and more electric appliances are being installed (see All Electric Home blog), and with the switch to Electric Vehicles, electricity usage is increasing. Solar Works always takes this information into account when designing a system.

Solar Works strives to give our customers the best design possible to suit their needs, please contact us today to get started.

See these Solar Works blog posts for more about the financial benefits of installing solar: