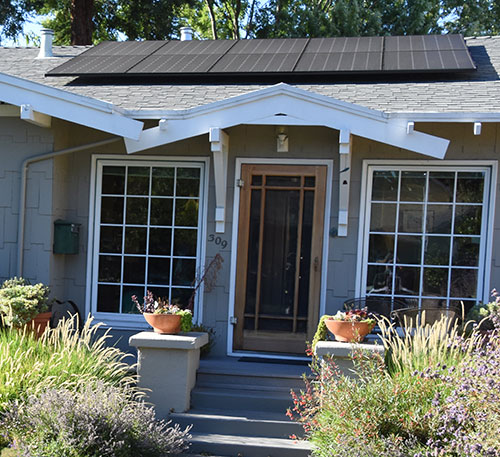 By John Matheny and Emily Collet —

Battery and Grid-Tied Solar Electric Systems
When the installation of solar electric (also called photovoltaic or PV) systems began to be used for homes it was because there was no grid-delivered electricity to the site. Off-grid systems that use lead acid batteries were installed to provide electricity during the day and into the night, but are limited by the amount of available sunlight. In the summer, these systems usually produce more electricity than can be used, and in the winter, often don’t provide enough, so off-grid users have to supplement electricity with another form of generation or deal with not having power. For uninterrupted electricity, an off-grid system has to be big enough to provide adequate power in the worst case scenario, and a major drawback is the heavy environmental impact of the batteries, which also require constant maintenance.

In the early 2000s, grid-tied inverter technology was introduced in the United States, and state and federal financial incentives jump-started installations of grid-tied systems all over the country. Connected to the power grid, this type of system has many advantages, although it doesn’t provide backup power in the event of a grid failure. A significant advantage is financial:  Most states have a Net Energy Metering (NEM) program, which allows users to sell energy back to the grid and buy it back when needed, a very attractive advantage for the bill payer. In addition, the amount of solar needed to power a home is substantially less than with an off-grid system because the installation can be sized for annual consumption instead of heaviest-use scenarios. Plus, grid-tied systems have a proven track record of reliability and a predictably favorable return on investment. In fact, most solar electric systems installed around the world are grid-tied. And now, grid-tied battery systems that interact with grid-tied solar are available in the United States.

Uses for Modern Batteries
A grid-tied battery system can provide two primary functions: Energy Arbitrage (self consumption) and Emergency Backup. Some batteries can be programmed to do a combination of functions. Reading this article will help provide some background information: https://solarworksca.com/net-energy-metering-nem-solar-homes-solar-works-sonoma-county/

Energy Arbitrage (Self-Consumption) Mode
In this mode, the primary function of the batteries is to reduce net usage during times of day when imported energy is costly. Assuming the batteries are charged from the previous day, they help reduce the amount of energy imported from the grid during the portions of the day when energy is most expensive (and in the highest demand). Once the sun comes up, a grid-tied solar system charges the batteries first, then power is allocated to home loads and any excess energy is exported to the grid. This helps make the grid more stable by decoupling demand from production. Here’s why: Batteries store energy when the grid-tied solar system is producing and discharge energy when there is higher electricity use, usually in the evening. Whether this is cost effective or not is dependent on a lot of factors, the main one being when energy is used. This is one of the reasons that supplying Solar Works with hourly interval usage data is so important in ensuring we can design the best system for you. 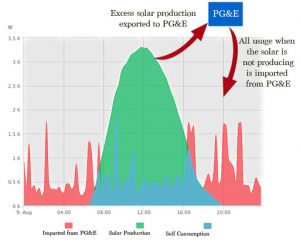 The illustration on the left shows the usage and production of a household with a traditional PV system with no battery. The red represents usage coming through the meter, the green curve is  solar production; and the blue shows “Self-Consumed”, which means the energy produced by the solar and directly used by the household. The green shows energy that is exported to the grid. Click on image to see larger view 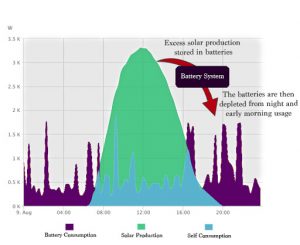 The illustration on the right shows a PV system with a battery set to Energy Arbitrage mode. The production and consumption are identical to the graph above. The green now represents energy that is produced by solar, but stored in the battery for use later in the day. By doing this, the consumer will avoid paying a high cost for energy that is consumed in the evening, after the solar production is low, but before the cost of energy reduces (this time is different for each rate schedule). The battery is programmed with the rate schedule so it knows when to charge, and when to discharge to maximize its effectiveness. Click on image to see larger view

Emergency Back-up Mode
In the event of a grid failure, batteries can be used for back-up purposes. The most commonly installed batteries on the market can provide 10 kWh of energy, and a maximum of 5,000 watts, enough power to run a freezer or refrigerator and provide some lighting when the grid is down.  An average refrigerator uses about 2 kWh per day. Some well pumps can be powered by this amount of power, but many use more than 5,000 watts on startup and could not be powered this way. If the primary function of a battery is for backup, it is not a good idea to use it for the other two functions, as it is very likely the power will go out when the battery is not fully charged. It is common for the battery to be set at a maximum discharge level. For example, if a 10 kWh battery is set to only use Energy Arbitrage for 5 kWh, the other 5 kWh will always be there in case of a power outage.

If large loads need to be powered during an outage, fossil fuel powered generator may be a more practical option, especially when an entire home or other structure needs back-up power. Even though the generator produces emissions when being used, it is not often needed. A back-up battery system needs to keep being charged even though it is idle much of the time, and has a lifespan of about 10 years. There is a considerable amount of imbedded energy in both a battery and a generator, but a generator does not have such a finite life. Therefore the generator could be the more environmentally friendly option, depending on the circumstances.

Incentives and Subsidies
If a battery is charged by solar or other renewable power source, the 30% Federal Tax Credit (FTC) can be applied to battery installations. The FTC provides a dollar-for-dollar credit, which can provide a great financial benefit.

In California, the Self Generation Incentive Program (SGIP) offers rebates for battery installations on a per kilowatt hour (kWh) basis. The cost for a standard 10 kWh battery installation is between $12,000 to $15,000. If the Federal Tax Credit can be used, the cost decreases to $10,500 or less. The SGIP incentive is currently at $350 per kWh, providing a $3,500 rebate on a 10kWh installation, reducing the net cost to approximately $7,000, depending on the scenario:

For more information about financial incentives and advantages, please visit this site:

Leave a review on Google 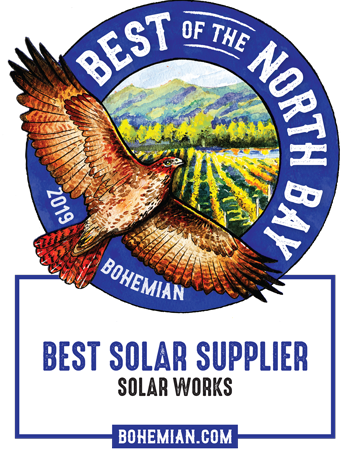 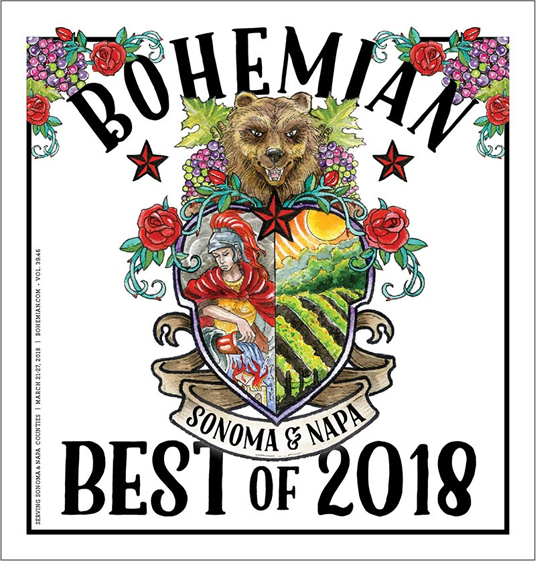 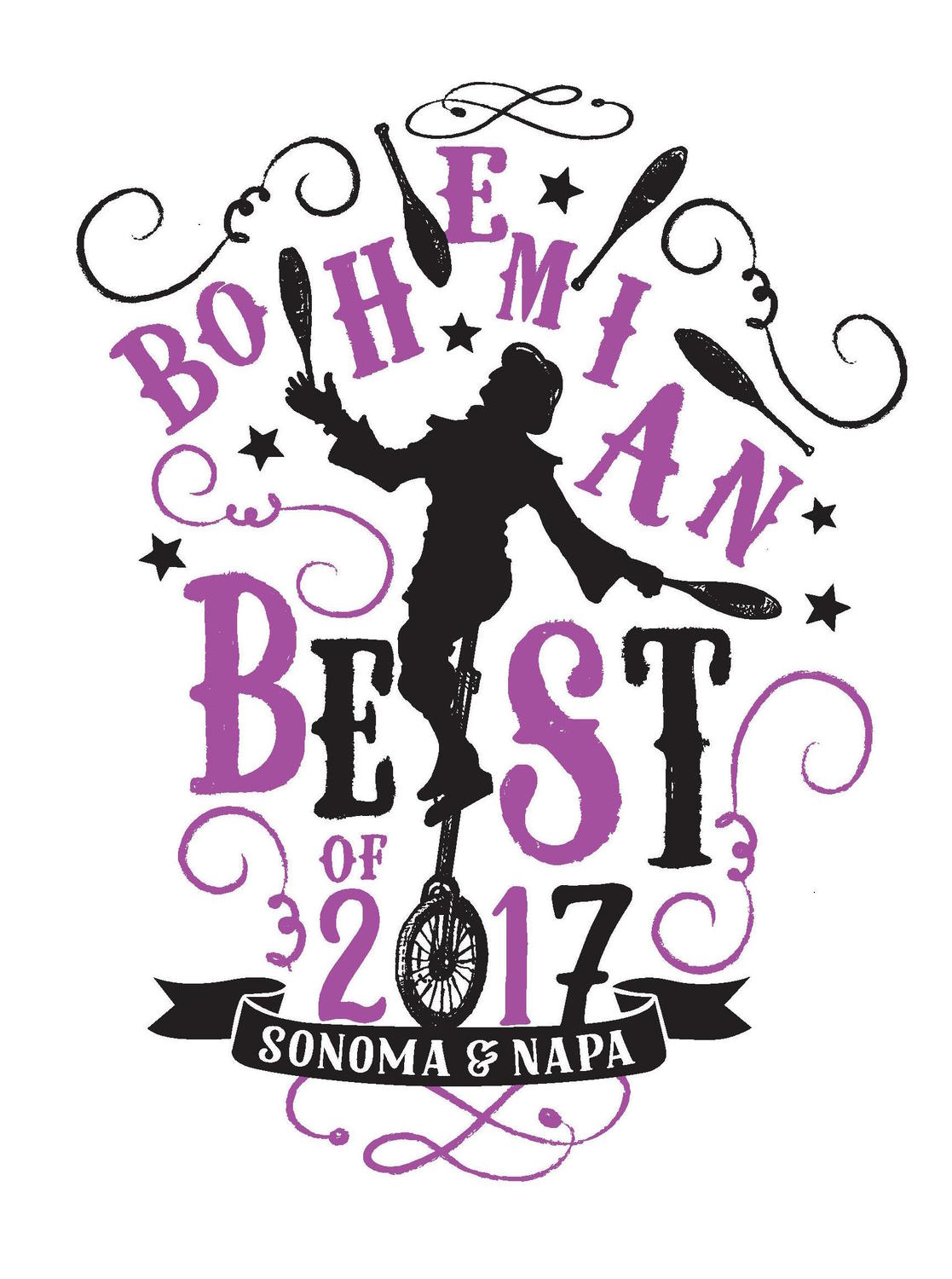